There is an unrelenting push by the world's governments and corporations to strip away your right to privacy. This ranges from installing back doors to encrypted messenger apps to the operating systems themselves. China already uses its Great Firewall to filter and probe all internet traffic and even monitor VPN software. Simultaneously, both Europe and the U.S. have made it clear they want to move in the direction of ending end-to-end encryption.

The question is, what can you — an end-user — do about it, especially now when millions are holding crypto wallets on their phones? The solution comes in the form of custom ROMs.

As one would expect, the largest culprits in privacy violations — notwithstanding government efforts — are coming from Big Tech. 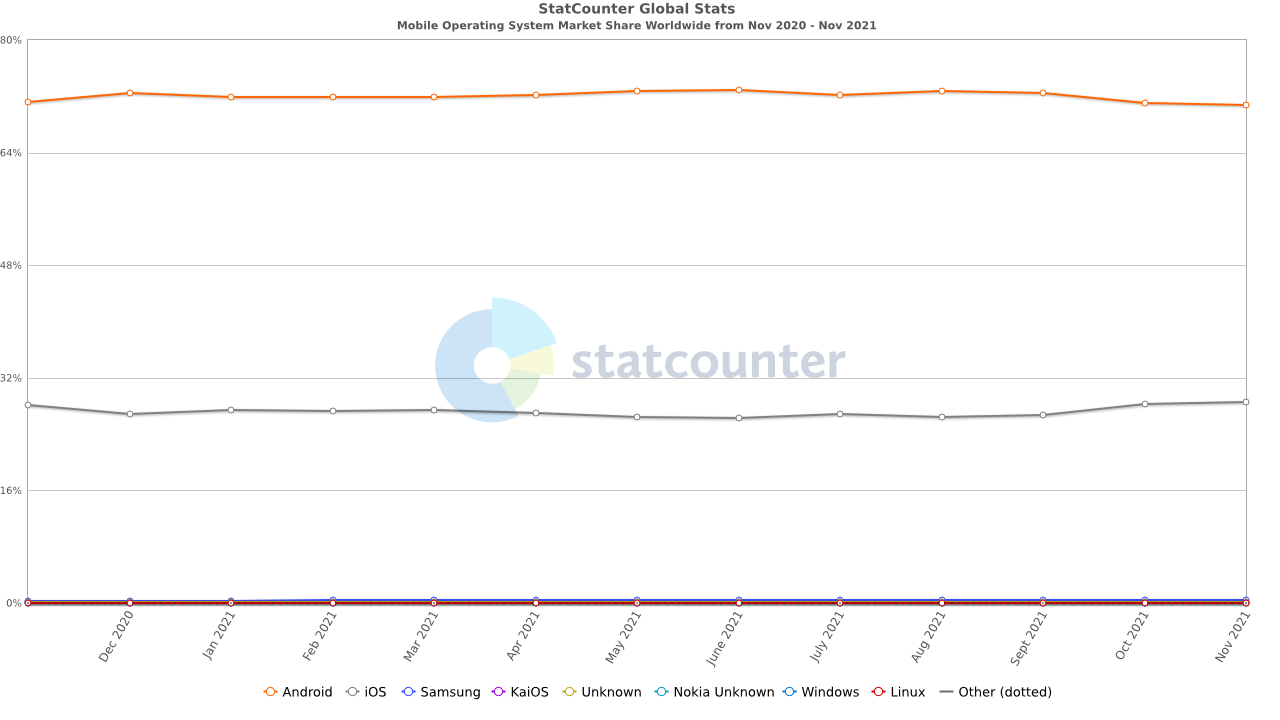 Google's Android completely dominates the mobile phone market at 70% of phones, while Apple's phones make up 28% of the market share. (image credit:gs.statcounter.com)

Google, Facebook (Meta), Amazon, and Apple are at the forefront of privacy violations, which are tightly linked to eroded security and greater vulnerability exposure. Here are just some of them:

When all is said and done, whether it is Apple or Google, both phone ecosystems rely on unique advertising codes that allow third parties to track users' behavior for ad targeting. It is then easy for companies like Facebook, with its long history of security breaches and privacy scandals, to ride this system. In turn, hackers can exploit this to their benefit.

The question is, what can you — an end-user — do about it, especially now when millions are holding crypto wallets on their phones? The solution comes in the form of custom ROMs.

What Are Custom ROMs?

Just like your gaming console or PC needs an operating system to function and accept apps as the bridge between hardware and software, so the smartphones have stock ROMs (Read Only Memory). Stock ROM is the default, official software on your phone, developed by the phone's manufacturer within the Android framework.

Likewise, stock ROM is interchangeable with the term 'firmware,' i.e., software at the root of the phone, so much so that it is 'firm' instead of 'soft' (easily changeable).

In contrast, custom ROMs are operating systems provided by third parties that in some way enhance your mobile experience. This can be done by either adding or removing features from the stock Android experience. Because iOS is a closed-source operating system, it is not possible to have modified versions of Apple phones.

Correspondingly, when we talk of custom ROMs, it is understood they are Android-based. GrapheneOS and ClearOS present themselves as one of the more popular options, providing a wide range of benefits for data privacy and business security. If you see fit to fortify these features with either one of them, continue reading.

At the onset, it is indicative that Edward Snowden, the iconic NSA whistleblower and privacy advocate, recommended GrapheneOS as the go-to custom ROM. The reason for this is that GrapheneOS has been built from scratch, with security as a top priority.

If I were configuring a smartphone today, I'd use @DanielMicay's @GrapheneOS as the base operating system. I'd desolder the microphones and keep the radios (cellular, wifi, and bluetooth) turned off when I didn't need them. I would route traffic through the @torproject network.

The core developer of GrapheneOS is Daniel Micay, having launched the project all the way back in late 2014. From a solo open-source project trying to expand Android's privacy and security measures, it expanded into CopperheadOS as the first iteration, sponsored by Canadian company Copperhead, headquartered in Toronto.

However, because the company failed to adhere to Micay's stipulation to remain independent and open source, there was an attempt at a hostile takeover in 2018, which was successfully repelled. Due to ensued legal wrangling, the custom ROM has been dubbed as Android Hardening until March 2019 and back to GrapheneOS since.

As such, it consists of a number of full-time and part-time developers supported by community donation, which is fitting for its open-source nature. With that exciting history out of the way, what key features does GrapheneOS bring to the table?

ClearPHONE is a more commercial approach to creating a privacy-focused Android experience. Funded by the Kickstarter crowdsourcing platform, ClearUnited company is using ClearOS custom ROM, rendering your Android device into ClearPHONE. In turn, ClearOS is an open-source Linux distro, a term reserved for open-source Linux operating systems that streamline the installation procedure.

ClearOS has been around since 2009, installed as a Linux server across half a million networks around the world. ClearUnited took this OS and tweaked it further into ClearOS Mobile, as a stripped and simplified Android 10 version, in 2019 via Kickstarter funding.

Based in the United States, ClearUnited is just one of many companies under the Clear umbrella, ranging from innovative health services to energy solutions such as Power-as-a-Service (PaaS). The CEO of ClearUnited is Gary H., with a background in wellness and nutritional supplements.

Although both options are in many ways superior to the stock Android experience, GrapheneOS follows the traditional community-driven and open-source path. ClearPhone may offer similar features on paper, but it is highly centralized. In other words, instead of depending on Google, you would have to depend on ClearUnited for updates and their integrity.

In contrast, GrapheneOS has a long history of tested dedication to transparency, innovation, and privacy-building, relying on existing FOSS ecosystems such as F-Droid. Therefore, GrapheneOS leaves it up to you to decide which apps to install, unlike ClearOS Mobile that comes preloaded with proprietary apps.

Lastly, although limited to the Pixel series of smartphones, GrapheneOS’ selection of devices is still significantly wider than a single ClearPHONE.